After mating, drake Mallard ducks shed their feather and look like the female. It is called “eclipse plumage”. Above is a Mallard beginning to shed for his eclipse phase.

The Mallard drakes cannot fly when they molt their wing feathers. This period lasts a month or more until they grow new feathers. The hen-like feathers help to protect and conceal them during this flightless period. By late summer, they again molt and grow the spectacular plumage they use fro attract a mate in the mating season.

“Feathers are a marvel of natural engineering, but they require constant care and must be replaced periodically to maintain peak performance. Waterfowl spend a couple hours each day just caring for their feathers. An oil gland at the base of the tail secretes a preening fluid that keeps feathers soft and pliable, which in turn prevents them from breaking, keeps them waterproof, and enhances their aerodynamics. Waterfowl use their bills to distribute this fluid throughout their feathers while preening. Ducks and geese also use their bills to realign their feathers and reconnect any Velcro-like barbules that have become separated.” http://www.ducks.org/conservation/waterfowl-biology/waterfowl-feathers/page2

Ducks and geese rely on their feathers to keep warm. Down and feathers have been a used to keep humans warm for millennia.

The Mallard’s head is usually green but its iridescent feathers reflect and absurd caring amounts of light creating a lustrous shine and changes color depending upon the sunlight and the angle at which it is viewed.

Like anything else, feathers wear out. Plucked and lost feathers are replaced right away, but broken and worn feathers are kept until they molt. All the species are flightless during the molting season until the new feathers replace the old.

“Female ducks molt as well, but differences between their basic and alternate plumage are far more subtle. Hens molt into their basic plumage just before nesting and keep this plumage until after the wing molt and brood-rearing activities are complete. Geese typically undergo just one complete molt a year, which has a much less noticeable effect on the birds’ appearance.” – http://www.ducks.org/conservation/waterfowl-biology/waterfowl-feathers/page2http://www.ducks.org/conservation/waterfowl-biology/waterfowl-feathers/page2

•The Mallard is the ancestor of nearly all domestic duck breeds (everything except the Muscovy Duck). Domestic ducks can be common in city ponds and can be confusing to identify—they may lack the white neck ring, show white on the chest, be all dark, or show oddly shaped crests on the head.

•The widespread Mallard has given rise to a number of populations around the world that have changed enough that they could be considered separate species. The “Mexican Duck” of central Mexico and the extreme southwestern United States and the Hawaiian Duck both are closely related to the Mallard, and in both forms the male is dull like the female. The Mexican Duck currently is considered a subspecies of the Mallard, while the Hawaiian Duck is still given full species status.

•Mallard pairs are generally monogamous, but paired males pursue females other than their mates. So-called “extra-pair copulations” are common among birds and in many species are consensual, but male Mallards often force these copulations, with several males chasing a single female and then mating with her.

•Mallard pairs form long before the spring breeding season. Pairing takes place in the fall, but courtship can be seen all winter. Only the female incubates the eggs and takes care of the ducklings.

•Ducks are strong fliers; migrating flocks of Mallards have been estimated traveling at 55 miles per hour.

•The standard duck’s quack is the sound of a female Mallard. Males don’t quack; they make a quieter, rasping sound.

•Mallards, like other ducks, shed all their flight feathers at the end of the breeding season and are flightless for 3–4 weeks. They are secretive during this vulnerable time, and their body feathers molt into a concealing “eclipse” plumage that can make them hard to identify.

•Many species of waterfowl form hybrids, and Mallards are particularly known for this, hybridizing with American Black Duck, Mottled Duck, Gadwall, Northern Pintail, Cinnamon Teal, Green-winged Teal, and Canvasback, as well as Hawaiian Ducks, the Grey Duck of New Zealand, and the Pacific Black Duck of Australia. 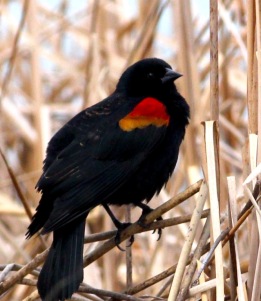 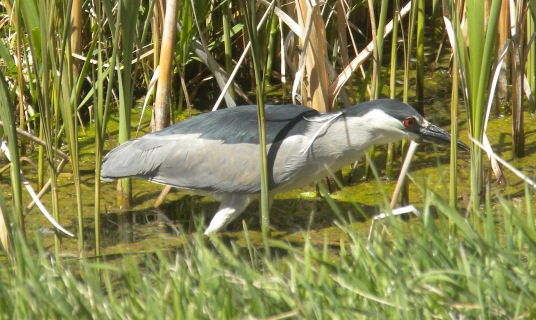 [These verses were inspired by a limerick from 1912 by Dixon Lanier Merritt seen below.] 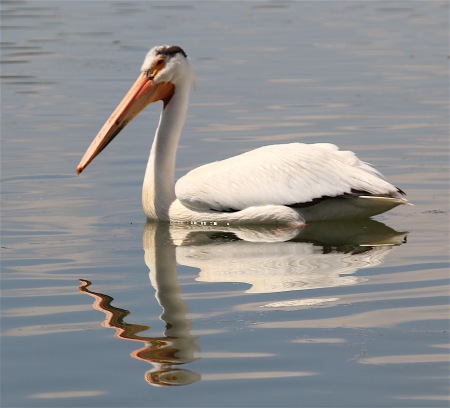 by Kenneth Harper Finton (Photos by the author)

An hour from my Colorado home another world of exists, a wilderness of tundra, alpine forests, and the twisted trunks and branches of the bristlecone pines. Mount Evans, at a measured high of 14,271 feet, is the highest summit of the Chicago Peaks in the Front Range a few miles from Denver, Colorado. It is the highest paved road in North America, visited by many thousands of tourists between Memorial Day and Labor Day, closed to traffic the rest of the year because of the extreme elevation. This is a world where where summer is unknown and snow can fall any day of the year. 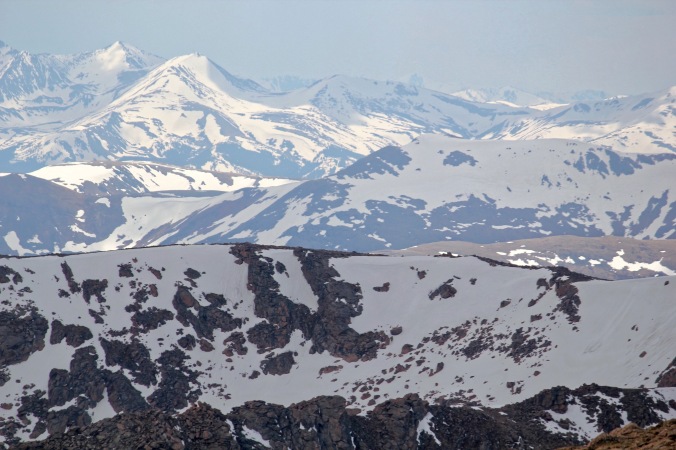 In Colorado, every thousand feet gained in height is like traveling 600 miles further north. Driving the road to the summit is like going through Canada to Nome, Alaska. The landscape and weather is like the most Northern parts of the North American Continent. The forty-five minute drive to the summit compresses distance. It is like driving from Denver to the Arctic Circle.

The alpine tundra is one of the harshest environments for life on the planet. It is consistently bombarded by intense sunlight  and buffeted by high winds. Flowers do bloom during the short spring season, but the leaves contain an anti-freeze-like pigment that converts sunlight to heat called anthocyanin.

Predators like mountain lions are found anywhere on the mountain. Black bears tend to stay below tree line. Bighorn sheep and herds of mountain goats roam the mountain at will, retreating to lower elevations when the weather is very bad. 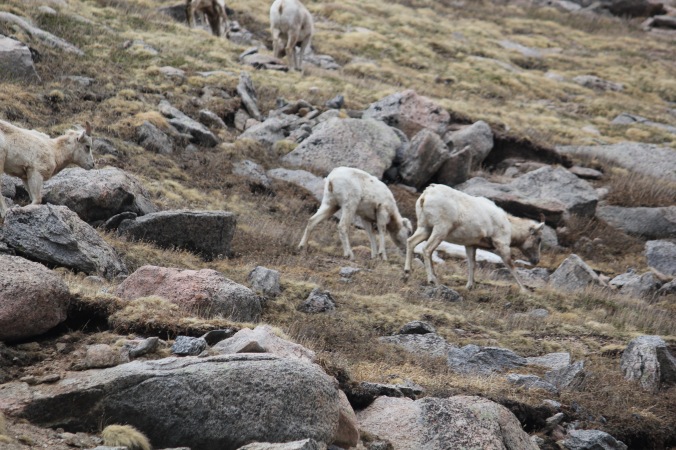 The highest astronomical observatory in North America is at the summit. The Crest House Restaurant was built on the early 1940’s but burned down in 1979. The stone wall remains have been turned into a place of observation and contemplation today. The rock foundation and walls remain as a windbreak for mountain travelers, and the viewing platform is one of Colorado’s premier scenic overlooks.

It is just a day trip to the top of The Mount Evans Scenic Highway from Denver. The journey snakes and climbs through nearly 9,000 feet of elevation gain, from the high plains of Denver through five climate zones to the summit of Mount Evans, one of 54 peaks in Colorado that soar to 14,000 feet and above – the famous Colorado “fourteeners.” 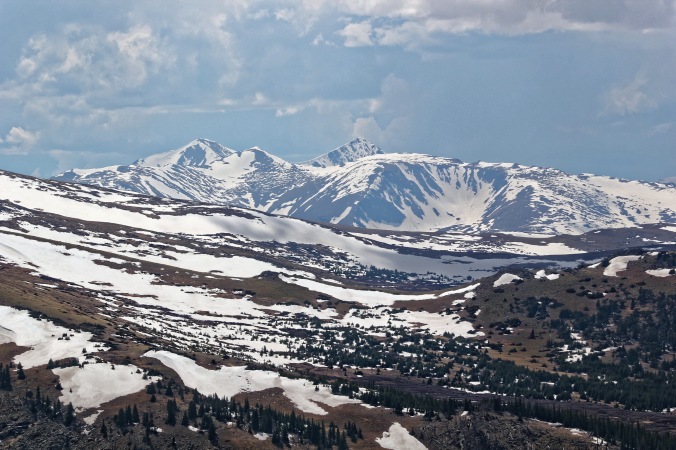 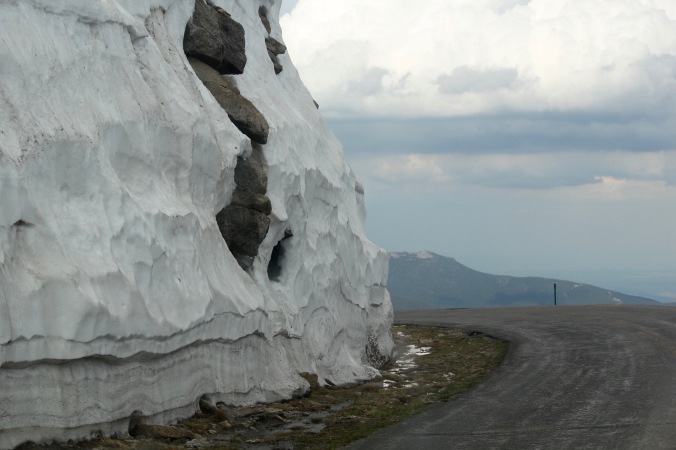 When traveling in a car it is easy to forget that you are in one of the most inhospitable areas in Colorado. Average temperatures in the summer are around 42 degrees. The sun is capable of burning the skin badly and the winds can be strong enough to blow you off the peak.