WORDS AND MUSIC BY KEN AND CHAYA FINTON ©1998

but when it comes to my lovin’,

I’m tired of the fast lane,

and my color TV,

with nothin’ in between.

And when I’m lookin’  for affection

I need your full attention,

’cause when it comes to my lovin’,

Out of nowhere, that unknown place where thoughts breed and memories thicken, a song keeps running through my head.  It is not a new song, but a simple old melody with quaint lyrics. Nor is this tune one that would ingratiatingly ingrain itself on a normal brain.  Yet it did—and all because to the word ‘purloined’.

THE DARING YOUNG MAN ON THE FLYING TRAPEZE

CHORUS: He’d fly through the air with the greatest of ease, that daring young man on the flying Trapeze. His movements were graceful, all girls he could please, and my love he purloined away.”

Once I was happy but now I’m forlorn

Like an old coat that is tattered and town

Left on this wide world to fret and to mourn,

Betrayed by a maid in her teens

Ah, yes, the proverbial maid in her teens—when hormones run rampant, passions soar, and common sense often flies into the stratosphere.  The maiden’s  curves and appeal are often the most voluptuous when she is in estrus, giving off the primitive scent of ovulation.

The girl that I loved she was handsome

I tried all I knew her to please

But I could not please her one quarter so well

He’d fly through the air with the greatest of ease

A daring young man on the flying Trapeze

His movements were graceful, all girls he could please

And my love he purloined away.

According to The Tin Pan Alley Song Encyclopedia, the 1868 song “The Daring Young Man On The Flying Trapeze” is “arguably the most famous circus song in American popular music”. 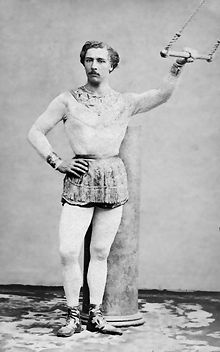 The song has a known history. It was about the exploits—sexual and artistic—of Jules Léotard, who developed the trapeze into an art form in the 1860s. He invented and popularized the one-piece athletic wear now called for him. The suit clearly displayed his underlying physique, a look that charmed women and inspired the song about purloined love.  The song was first published in 1867, words written by the British lyricist and singer George Leybourne, music by Gaston Lyle. Thomas Hischak says the song was first heard in American Vaudeville in the 1870s, where it was popularized by Johnny Allen.

Léotard, of course, invented the leotard. This simple one-piece garment allowed for the unrestricted movement which was so vital in his death-defying act. Later,  it would become standard wear for ballet dancers.

Léotard was paid a hundred and eighty pounds a week for his act, the equivalent of five thousand today, but died at age twenty-eight from an infectious disease and not from a fall.

Purloined in a lovely description for stealthy stealing. The end result of “purloin,” is that the object is gone, stolen, lifted, pilfered, embezzled, or pilfered or swiped. “but the style or manner of the crime varies with the term. They terms all have shades of meanings. “Pilfering” or “filching” is a hidden crime. A “heist” is a major theft that often involves George Clooney or Frank Sinatra.

One famous use of the word “purloin” is found in Edgar Allan Poe’s short story written in 1845, “The Purloined Letter”. It was one of three works that were forerunners to the modern detective story.  The Origin and Etymology of the word seems to be from Middle English, to put away, misappropriate, derived from the Anglo-French purluigner.

Some they like to  stay – some they cannot light.

I like to spend my time with people I love,

and wake in the morning to say with love:

Some they hold you close, some they like to twine.

Daytime cares,  see it ’round me everywhere.

It is said that writers “write to be read.”

Then painters paint to be seen, actors act to impress and singers sing to be heard.

Technology and world Internet communications have obviously changed the world. Though it has democratized the ability to be read and seen and heard, by doing so it has practically eliminated the institutions that originally supported and brought culture to the world. Some vestiges of the old system remain, but they are losing ground with each passing year. They have been replaced by myriads of smaller, more democratized platforms that do not pay, do not develop and do not guide.

Moguls still control what is printed and sold in local stores. They chose the music that is allowed to be bought at box stores, the movies that are shown and the art that is displayed in museums and fine art shows. The competition for such space is fierce. The rewards to the artists have been drastically reduced from that it was just thirty years ago.

This leaves the would-be writer with a great dilemma. They feel that they have talent and should pursue an audience and readership, but the audience is slimmer and the finger of fate even more fickle than ever.

Only by applying a talent is the talent polished and sharpened. “Practice,” it is said, “makes perfect.” Perfection, though, is a subjective judgment that should be left out of that axiom. Practice makes us more exceptional. It is a fact, though, that natural talents of all kinds need to be performed and utilized to get beyond the level of the commonplace.

Writers now write blogs to keep their talents active and polished, but the readers of blogs are also a fickle lot. The individual blog does not really reach a substantial audience. Blogs and personal journals are worthy tools for a writer, as they can refer to them in the future, draw on them for ideas, and reference them for later promotion. There are few, if any, works that cannot be made better by multiple rewrites. So coming back to what you did before it quite valuable for the future.

Professional writing has not totally become extinct, but it is nearing that vanishing point. Professional writers are not free to write as their muse moves them, but are pressured to write what their superiors believe their readership wants to read.

Even with access to statistics that determine what people are choosing to read, the writer is often no longer free to follow their muse and write from the heart if they want to increase their following. Yet, writing from the heart and being true to your own voice is the only possible way to beat the odds. Only that will make you stand out in a crowd.

Even if you write from the heart, your heart and voice must be very special, very unique and quite original. Your perceived persona must be likable, strong and quite different from the masses. The vast majority of us will never be that person.

Chloe Thurlow recently spoke of  “the time before smartphones made the whole world a banal image and the photographer like the editor became a dinosaur.” https://www.facebook.com/chloe.thurlow.5?fref=ts

We have a changing dictum.

As writers, we must write for ourselves to be original. We will probably never make any financial profit from these efforts. Few in history ever have. We may not even achieve any large readership no matter how hard we try. Everyone has an opinion to share, a broken heart to express, a love that they feel they must share with the world about.

All lives are novels in the making.

The only thing we can do is persist or quit. Of course, if we quit, we never will have an audience. If we want an audience or a readership, our only alternative is to persist. To persist means to continue through depression and despair. It means we need to develop tools to combat and dispel our negative feelings. To persist means to struggle with the reality that we spend too much time doing things that we do not love in order to do what we do love.

It is easier to be a baker or a cook or a carpenter. All such work is creative, but the requirement of pleasing more than a few is not essential in many occupations.

Artists always had to pay their dues. The fees are even higher these days.

“Dearie” is a popular song written by David Mann; lyrics, by Bob Hilliard. The song was published in 1950. The Jo Stafford/Gordon MacRae record was recorded on January 14, 1950 and released by Capitol Records as catalog number 858. It first reached the Billboard magazine charts on March 3, 1950 and lasted 11 weeks on the chart, peaking at #12.[1]

The various versions of the song (combined, as was normal for Cash Box magazine reached #4 on the Cash Box Best-Selling Records chart.

Dearie, do you remember when we

Waltzed to the Sousa band

My wasn’t the music grand

Chowder parties down by the seashore

Every Fourth of July, test your memory

Do you recall when Henry Ford couldn’t even fix

The running board under a Chandler six

Well if you remember

Well Dearie, you’re much older than I

What? Hey, wait a minute, Honey, I just got a long memory that’s all.

Dearie, do you remember when we

Stayed up all night to get

Pittsburgh on a crystal set

Made you laugh and then cry

Test your memory, my Dearie

Do you recall when Orville Wright flew at Kittyhawk

But take it from me I would rather walk

Well if you remember

Well, Dearie, you’re much older than I

Dearie, do you remember how they

My wasn’t the Palace packed

Test your memory my Dearie,

Chicago all in flames

Sure caused a terrific row

They blamed it on Mrs. O’Leary’s cow

Well, Dearie, you’re much older than,

Quite a bit older than,

You’re older than I.

YOU  SMELL SO  FRESH AND SCENTED.

YOUR LOVELY LIMBS AND BRANCHES GREW

AND  YOU SEEMED SO CONTENTED.

AS  YOU WERE IN SEPTEMBER DAYS,

A SHADY GREEN AND LIVING TREE

THAT WE COULD ALL REMEMBER.

YOUR TIME IS IN DECEMBER

FOR AFTER THAT, O CHRISTMAS TREE

YOU’LL SURE TO BE DISMEMBERED.

YOU TAKE AWAY OUR CO2

OUR ATMOSPHERE YOU DID RENEW