Melania, you love him, right? Some advice from Garrison Keillor

My wife has gone East for a couple weeks and now there is nobody to say, “You’re not wearing that tie with that shirt, are you?” Nobody to point discreetly at her left nostril and hand me a tissue. Nobody to remind me of the name of that woman with the glasses (Liz) whom I ought to know — I told my wife, “Her and me went to school together” so that she’d have the satisfaction of saying “She and I.” “No,” I said, “I don’t think you went to our school.”

It’s a comedy routine when she’s around and now it’s a lonely monk in his cell, quill pen in hand, making illuminated letters and living in darkness.

At this very moment, if you want to know the truth, the big crisis in my life is the fact that my iPhone has accidentally upgraded itself and I don’t know how to downgrade it except by hurling it into the river. My wife would know how to fix this.

Some genius at Apple designed it and now I need a password to make each call or text and the texting screen is odd. Instead of a simple “Send,” there is a row of icons. I press one and colored balloons float up in the background, I try another and the phone offers me a choice of cartoons to accompany the text — a ferocious gorilla in a cage, Snow White, a galloping horse — which must be big fun for 5-year-olds but I’m 75 and I don’t need balloons to accompany my texts, and meanwhile the thing keeps asking for my Apple ID verification, which I do not have. This hellish idiocy descended on me suddenly; evidently I clicked on a “Yes” I shouldn’t have clicked on. My wife would know how to do a reset. I’d like to reset the phone with a ball-peen hammer.

Man was not made to live alone. My friend Frank came to visit who has been divorced for a couple years and I sat and took issue with him on about half of what he had to say which required me to lean farther to the right than I care to lean but I did it for his own good and he was grateful for the opposition. He’s been alone for a long time, living on love and sympathy, and he needed the boost to self-esteem that comes from someone telling you you’re full of prune juice.

This is the American way. Those whom we love, we needle. Better honest skepticism than false piety.

One person can’t do it all. I pretty much handle foreign policy issues in our home because I am not inhibited by ignorance, whereas my wife handles science, technology and the arts. She reads science articles in the paper and explains them to me. She tends the plants in the yard and knows their names. She is well-versed on social convention and has sound opinions about music, books and design. The marriage operates on a delicate system of checks and balances. I say, “Let’s put a ping-pong table in the living room” and she says, “After I’m gone,” and so we don’t.

Everyone needs a truth-teller in his or her life and truth-tellers are becoming rare. It’s the Age of Sensitivity when we’re made to feel that we should be validating each other and not telling someone that his fly is open. Which brings me to the point of this column (“And about time,” I can hear her say).

Melania — do you mind if I call you Melania? — I assume that you love this guy. I don’t, even though Scripture tells me to. A bully and a braggart who is also a liar and somewhat clueless might be lovable if he were a cabdriver, but not a president. But you do, so fine. You owe it to him to tell him, “Darling, you’re making an ass of yourself. For the sake of your family, stop.” Would you let the man run around in a headdress of flamingo feathers singing the song about each and every highway and byway and not in a shy way with his trousers around his ankles? No, you wouldn’t. But that’s what’s happening now.

You married a New York Democrat and now you’re married to Aaron Slick from Punkin Crick. Make him stop. If you can’t tell him face to face, try Twitter. A short punchy message will get his attention. Something like, “You are dumb enough to be twins. Shut up and be beautiful.”

Garrison Keillor is an author, entertainer and former host of “A Prairie Home Companion.” 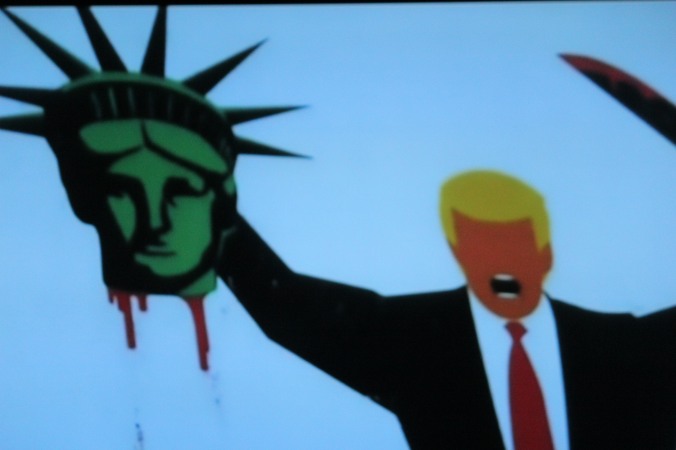 When Trump led the birther movement, he quickly learned how easy it was to gain a following from some of the most anti-intellectual and ignorant folks in the America. Unless he was truly fathered by an orangutan, as Bill Maher suggested, he also knew that what he was advocating was quite removed from the truth. More likely, he wanted to destroy Obama because of his race, as he had learned from his father about discrimination and prejudice and keeping the uppity Africans in their place.

Armed with the knowledge that Americans could be led and misled with the flimsiest of facts, he sailed that pirate ship to the presidency. Bully tactics, common to both authoritarian and insecure personalities, became his staple for knowing our his competition—”Little Marco”, “Lying Ted”, “Low Energy” George, “Crazy” Ben—all were impaled and fell before Trump’s vitriolic utterances.

He addressed ‘hot button’ issues like immigration, the danger of foreign terrorists, a woman’s right to choose her own life and destiny, gun control, black violence, and Mexican culpability for what he liked to call a disastrous American economy. Blacks lived in an inner city graveyard. Towns decimated from the loss of manufacturing jobs were living without hope and only he could add dignity to their undignified lives. He knew all this and, in his tiny heart, he thrived on it.

Not many educated people took Trump seriously. He was the clownish buffoon, the Lenny Bruce of the political world who mouthed his disjointed thoughts into something that occasionally resembled coherency. His orangish skin with white eye sockets was a strange new figure reminiscent of Batman’s Joker. His head, topped by a cultured comb-over of straw-like hair, begged us to question the nature of its reality.

He began his line of campaign promises with a pledge to build a wall between Mexico and the United States that would be paid for by Mexico. He would deport any Mexican illegally resident in the US. Some Mexicans, he mused, might be good people, but Mexico sent the criminals and the rapists to the United States to work the fields, drive the nails, mow the grass, plow the snow, build the pipelines, and make the beds.

He announced that he would ban Muslims from entering the United States. He would not accept immigrants from war-torn Mideast countries. He would be the Law and Order candidate and, most telling of all, he was the only one that would fix an America that was on a fast downward spiral into poverty and oblivion.

How could anyone take these policies seriously? Not even the opposing candidates questioned the legitimacy or possibility of these false promises. That most of his solutions were unconstitutional was not even considered. Hilary Clinton was, after all, ready to break the glass ceiling once and for all—until competition showed up in the urban scarecrow figure of Bernie Sanders. Bernie has a twenty-minute memorized speech that he delivered over and over, speaking about how the one-percent ruled the world, how Wall Street and the banks have ruined the economy while enriching themselves. He wanted health care for everyone as an American right, free college for the masses and called his program a political revolution.

The free college and Revolution grabbed the younger generation by the seat of the pant. All young people want a revolution. The older generation had lived through the revolution of the 70’s and had learned that revolutionaries are either destroyed of assimilated into the system. They never had a better answer that the imperfect system that we have now. By working inside, they found, they could profoundly change some things. The distribution of wealth was closely held by the well established rich. It seemed that nature itself had no qualms about severe inequality and chaos. One kid would eventually have most of the marbles.

Hillary Clinton, Trump realized, was not necessarily fated to be the ordained leader of the free world. If Bernie and a few minor party candidates could divide the vote, Trump could sail upstream with the wind at his back. All he needed was a string of bologna, some white bread with enough Russian dressing to make a palatable sandwich and he could force feed it down the throats of this who still refused to believe in him.

November 8, 2016, in the early hours of the evening, the world gasped as they learned that the United States had elected Clara Belle the Clown leader of the free world.

Trump’s bold-faced lies work for him now as much as they worked for him as a candidate. He consistently misleads the people. He will rationalize most anything.

No matter that there is no proof of voter fraud, millions of people voted illegally according to the new American Führer.

There are so many lies from his mouth, it is hard to remember them all. Instead of making America great, America is frightened that the country they have loved is about to become an alt-right wasteland. Trump’s cloddish footprints will soon be found all over the social landscape that we have worked so hard to create and protect all of our lives.

There is little doubt that Trump is the most unethical conman ever elected to the presidency. There is no doubt that his election was a huge error in judgment by some of the American people. They will learn to regret it as time progresses.

Americans have been politically divided for years, but the divide that separates us now are far more serious than any time since the Civil War. We live in dog time. Every day seems to be a month and every week a year. Liberties are being breached because no one had addressed the long term effects of such radically racist policies.

Courts are disrespected as the Executive Branch seeks to control all the government. Millions protest and march in the streets worldwide. The world is much less secure with Trump in power. This insecurity will surely erupt into violence in the future. Pent up emotions, like temperatures, can only be controlled so long before they come to a boil.

So far, demonstrations have been peaceful. People have listened to the words of John Lennon, who told us, “When it gets down to having to use violence, then you are playing the system’s game. The establishment will irritate you—pull your beard, flick your face—to make you fight! Because once they’ve got you violent, then they know how to handle you. The only thing they don’t know how to handle is non-violence and humor.”

Trump has failed to consider is the indomitable spirit of the majority or Americans. He has also underestimated the power if the courts to protect our democracy. If he thought could stack the deck with his power players and ride his whirlwind to world domination, he thought wrong.

Much is wrong with society, but it is our society, not his. We reserve the right to build is as we see fit. We will iron out the wrinkles in our social fabric. We will make technology work for all of us, not the wealthy few.

The golden age of civilization is still ahead of us, not behind us.