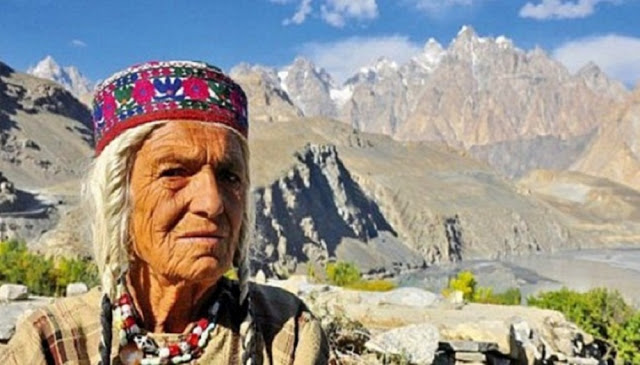 LEGEND HAS IT THAT THESE ARE THE PEOPLE OF SHANGRI-LA

Is living well past 100 yeara only a dream?  Not in Northern Pakistan.

They, like many in Northern Pakistan, claim to be descendants of the soldiers who came to the region with Alexander the Great‘s army in the 4th century BC.

Healthy living advocate J. I. Rodale wrote a book called The Healthy Hunzas in 1955 that asserted that the Hunzas, noted for their longevity and many centenarians, were long-lived because of their consumption of healthy organic foods such as dried apricots and almonds, as well as their getting plenty of fresh air and exercise.[21] He often mentioned them in his Prevention magazine as exemplary of the benefits of leading a healthy lifestyle.

Dr. John Clark stayed among the Hunza people for 20 months and in his book Hunza – Lost Kingdom of the Himalayas[22] writes: “I wish also to express my regrets to those travelers whose impressions have been contradicted by my experience. On my first trip through Hunza, I acquired almost all the misconceptions they did: The Healthy Hunzas, the Democratic Court, The Land Where There Are No Poor, and the rest—and only long-continued living in Hunza revealed the actual situations”. Regarding the misconception about Hunza people’s health, John Clark also writes that most of patients had malaria, dysentery, worms, trachoma, and other things easily diagnosed and quickly treated; in his first two trips he treated 5,684 patients.

Clark reports that the Hunza do not measure their age solely by the calendar––as he also said there were no calendars––but also by personal estimation of wisdom. This leads in turn to notions of typical lifespans of 120 or greater.

The October 1953 issue of National Geographic had an article on the Hunza River Valley that inspired Carl Barks’ story Tralla La.[23] Their standard of living is totally different from the others. Barks said,  “the healthy way of that kind of living should be an example to us.”

Hunza people are people who take a bath in a cold water, and they can give a birth to a baby on 65 years which for us is inconceivable.

In summer, they eat only raw foods and in winter they use dry fruits, especially apricots, germinated seeds and cheese from sheep.

”Hunger spring” is called the period when they are fasting, then they do not eat anything except the drink clean water.

From 2 to 4 months they drink that water and consume the apricot seeds.

One of the Hunza people, known worldwide as Said Abdul Mobuda, totally confused the workers for immigration services when he pulled out his passport on which was written that he has lived 160 years. They did not believe him until they checked that the man is really born 160 years ago and that in his village all the people have long lifetime.

A variety of Y-DNA haplogroups are seen among the Burusho. Most frequent among these are R1a1 and R2a, which probably originated in Central Asia during the Upper Paleolithic.[17][18] R2a, unlike its extremely rare parent R2, R1a1 and other clades of haplogroup R, is now virtually restricted to South Asia. Two other typically South Asian lineages, haplogroup H1 and haplogroup L3 (defined by SNP mutation M20) are also common among the Burusho.[19] [18]

Other Y-DNA haplogroups reaching considerable frequencies among the Burusho are haplogroup J2, associated with the spread of agriculture in, and from, the neolithic Near East,[17][18] and haplogroup C3, of Siberian origin and possibly representing the patrilineage of Genghis Khan. Also present at lower frequency are haplogroups O3, an East Eurasian lineage, and Q, P, F, and G.[18] DNA research groups the male ancestry of the Hunza with speakers of Pamir languages and the Sinti Romani (Gypsies), due primarily to the M124 marker (defining Y-DNA haplogroup R2a), which is present at high frequency in all three populations.[8] However, they have also an East Asian genetic contribution, suggesting that at least some of their ancestry originates north of the Himalayas.[20]