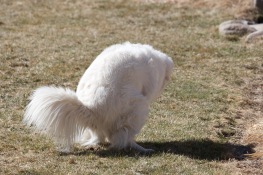 Only about 60% of dog owners pick up after their pets, The 83 million dogs in the US generate more than 11 million tons of waste each year.

The real problem is that we view at the poop as waste rather that a resource that can be used and recycled for both compost and energy. Dog waste can be anaerobically digested to produce useful products.

The same biological process that makes compost of dog poo in used in Toronto, Ontario to produce a biogas that can be burned for energy. The residue can be used for compost for gardens, plants, and greenhouses. Toronto actually collects dog poop through a curbside bin program and makes a profit.

The dogs in the Denali National Park kennels produce around 50 pounds of poo each day. Alaska has had to deal with the problem for hundreds of years, as the natives have always had dog teams and the attendant problem of dog waste. Denali established a four-bin composting system where the nitrogen-rich waste is mixed with sawdust and/or leaves to provide the necessary carbon. This method—mixed with water, and rotated when it naturally heats up to 145 degrees—transforms the waste into a sweet smelling, earthy soil that is packed with nutrients. They use the soil to compost gardens and flowerbeds in the park.

When the microorganisms have broken down all the organic material, the compost pile is done “cooking”. This process can take anywhere from 4-8 weeks. The nutrient-rich material that is produced is called humus. It increases the nutrient content of soils and helps retain moisture.

San Francisco, with its 120,000 dogs produces 32 million pounds of poop per year. They began a program t divert dog waste into compost with biodegradable poop bags. The leader in that market is BioBags, who not only partnered with San Francisco but sells more than 19 million bags a year.

New York boasts the only dog park in the nation in which dog waste is processed right on the site. “This is the only one in the state and the city and possibly North America which has dog waste composting onsite completely handled by the people here at the park,” said Leslie Wright, the New York City regional director for the State Office of Parks, Recreation and Historic Preservation.

The park provides poop scoops and paper bags for people to pick up the waste and deposit into designated compost bins. Park staff takes it from there, mixing the waste with sawdust and transferring it to larger composting bins.

“The recipe for composting is to have a carbon source, a nitrogen source and mix them together,” Wright said. “The waste is then cooked and cured to kill microbes and pathogens. Eventually, it will be used as fertilizer for nearby gardens on Kent Avenue. But more importantly, it will keep waste and those ubiquitous plastic bags out of landfills.”

In Boulder, Colorado, Rose Seeman started up EnviroWagg and now process more than three tons of poop a year to make her product called “Doggone Good Compost”. They are planning to expand even further and partner with collectors such as Pet Scoop and Duty Calls.

There is also a booming market in biodegradable poop bags. BioBags sell more than 19 million bars each year. Regardless of the type of bag used, when dog poop degrades in a landfill, it produces the potent greenhouse gas methane that rises into the atmosphere and contributed to the problem of global warming.

Dog parks, doggie daycares, veterinarians, and shelters can recycle their dog waste for beneficial purposes. Doing the right thing always has its own reward.

ADDED BONUS:  AN UNRECORDED SONG LYRICS ABOUT THE SUBJECT. I WROTE IT LAST YEAR.  MAYBE I WILL TRY TO RECORD IT. -KHF

(TO THE MELODY OF “OLD SOFT SHOE”

A one, a two, a dogetty-doodlely dew.

First you take your left foot and set it down.

Then you find your foot’s not touching the ground.

It has landed in a pile of poo …

Then you wipe your left foot in the grass

Twist it to the right, then to the left.

Shuffle all around and wipe it clean

It’s so easy, see what I mean.

A one, a two, a dogetty-doodlelly do.