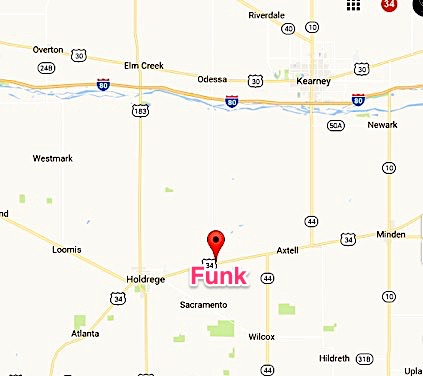 Those swishing through Nebraska on Interstate 80 will not see Funk. The only way I found it was coming up from Kansas on US 34. When the “Welcome to Funk” sign appeared before me, I had to stop and see what Funk was really like.

It is a town of less than 200 people surrounded by the corn industry. A huge concrete grain shipping and storage facility if the heart of the economy.

As expected, Funk was named for P.C. Funk, a Civil War veteran who bought some land to foster a townsite for a branch of the Nebraska-Colorado Railroad (now known as the Burlington Northern). The town lived on through three major fires, the  serious droughts during dust bowl problems in the 1930’s, and the Great Depression.

Today, some well-kept Victorian homes still grace the central park and a small downtown section keeps a few residents occupied.  It is a place where there is no rush and time moves slowly as in the decades that have passed since its founding.

Below is a short video of Funk today.